Munich Airport (MUC) is located 28 km away from the city of Munich and can be easily reached thanks to the efficient public transport system. You can choose between the S1 or S8 S-Bahn fast train which will take you to the city center in about 40 minutes, or the bus lines which reach the Munich Trade Fair and cities near the Bavarian capital, such as Augsburg, Innsbruck, Wasserburg and many others.
On April 26, 2016, the new satellite terminal was inaugurated, hosting 52 new departure gates distributed over 3 floors.
The new satellite has been created for the ever increasing number of passengers flying from Munich airport, offering many services and facilities and can be reached from Terminal 2 using a free energy efficient shuttle service. 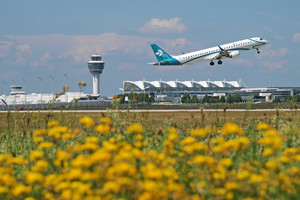